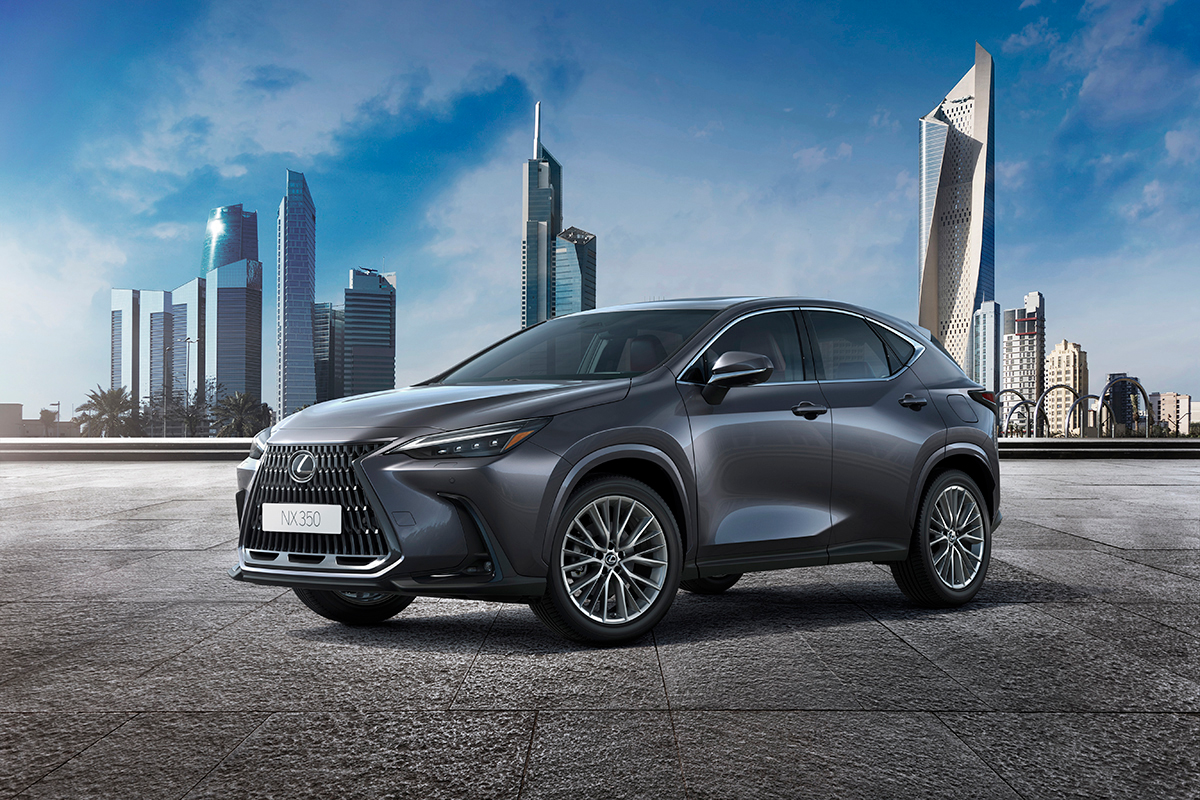 In an effort to meet the growing and diverse aspirations of discerning drivers in Kuwait, Lexus has announced the launch of the all-new Lexus NX. The second generation of the luxury mid-size crossover further raises the bar for performance, comfort, and safety to redefine the segment, and opens the next chapter for the Lexus brand.

With the launch of the first-generation RX in 1998, Lexus created a new category of luxury crossover and has been a leader in the realm ever since. In 2014, Lexus launched the NX, which was well received by customers, thanks to its agile driving performance and powerful design, and has gone on to sell over one million units in more than 90 countries across the globe.

The all-new Lexus NX heralds new directions in exterior and interior design and comes with a new electrified powertrain, bringing a quantum leap in dynamic performance to deliver a more rewarding connection between driver and machine with the Lexus Driving Signature. The introduction of the model also marks the debut of a brand-new multimedia platform that takes connectivity, information, and convenience to the next level.

In addition, the all-new vehicle benefits from the expansion of the scope and functionality of the next-generation Lexus Safety System+ to help guard against an even wider range of accident risks and bring greater peace of mind to drivers in the region. 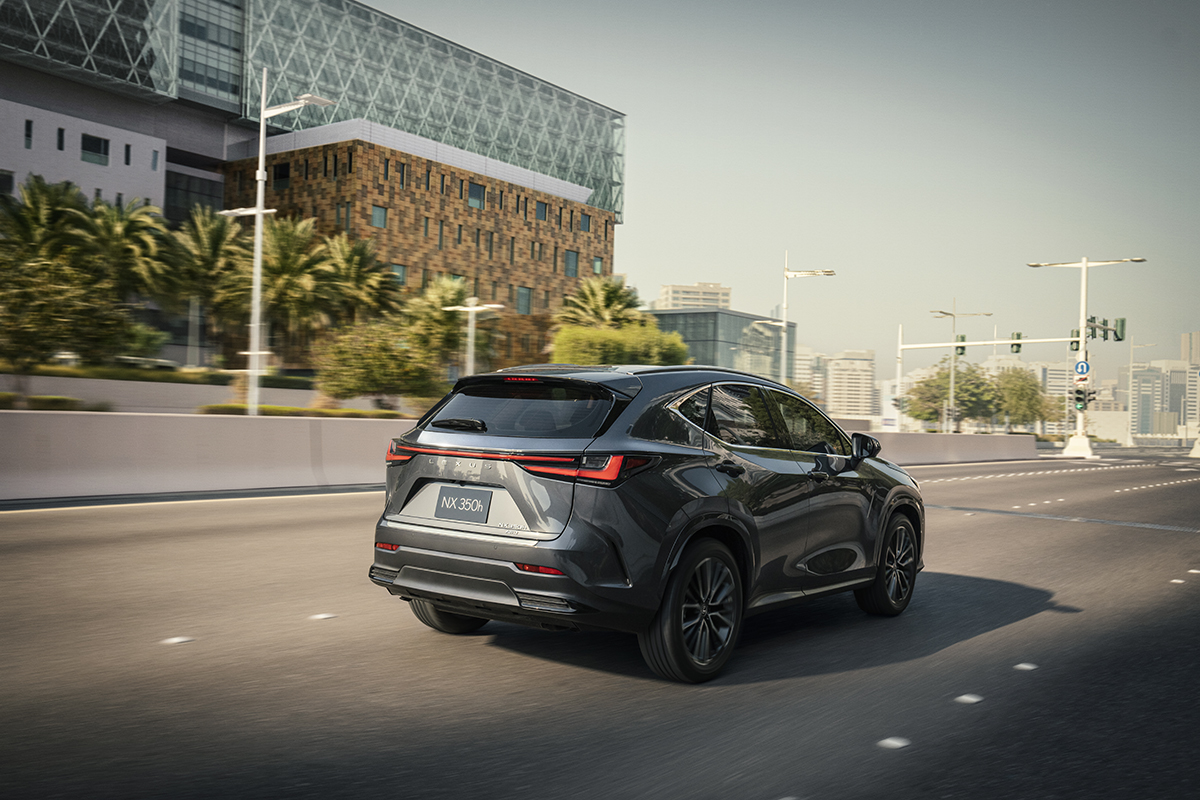 Takeaki Kato, the NX Chief Engineer, explains: “For this project, we ensured quality by implementing ‘digital development’ to evaluate the design structure under various conditions using computer models. Professional racing drivers also conducted test drives at the Shimoyama test course to thoroughly train the vehicle’s body structure and inherit and evolve the Lexus driving flavor. We have redefined the ideal cockpit space as the contact point between the driver and vehicle, aiming for a design that enables a deeper, more intuitive connection and allows for more precise control of the vehicle. All of this has been done with the full force of our team working together for the smiles of our customers, who we hope will be inspired by the passion that was poured into delivering this exceptional vehicle.”

Kei Fujita, Chief Representative, Middle East and Central Asia Representative ‎Office, Toyota Motor Corporation, commented: “We are thrilled to launch the all-new Lexus NX in the region, announcing the beginning of Lexus’ next chapter of excellence. The vehicle is designed to meet the diverse lifestyles of our Middle East customers with a comprehensive upgrade and complete renewal of the model’s key strengths. The introduction of the electrified model, which is also a prominent feature of our upcoming model lineup, underlines Lexus’ commitment to promoting the realization of a carbon-neutral society.”

Fujita continued: “The sophisticated new design and enhanced driving performance add to NX’s appeal, while a wealth of new technologies ensures every journey is safer, more connected, and more enjoyable. I’d like to thank our loyal customers in the region for continually inspiring us as we strive to create amazing experiences by transforming performance into passion and technology into imagination.” 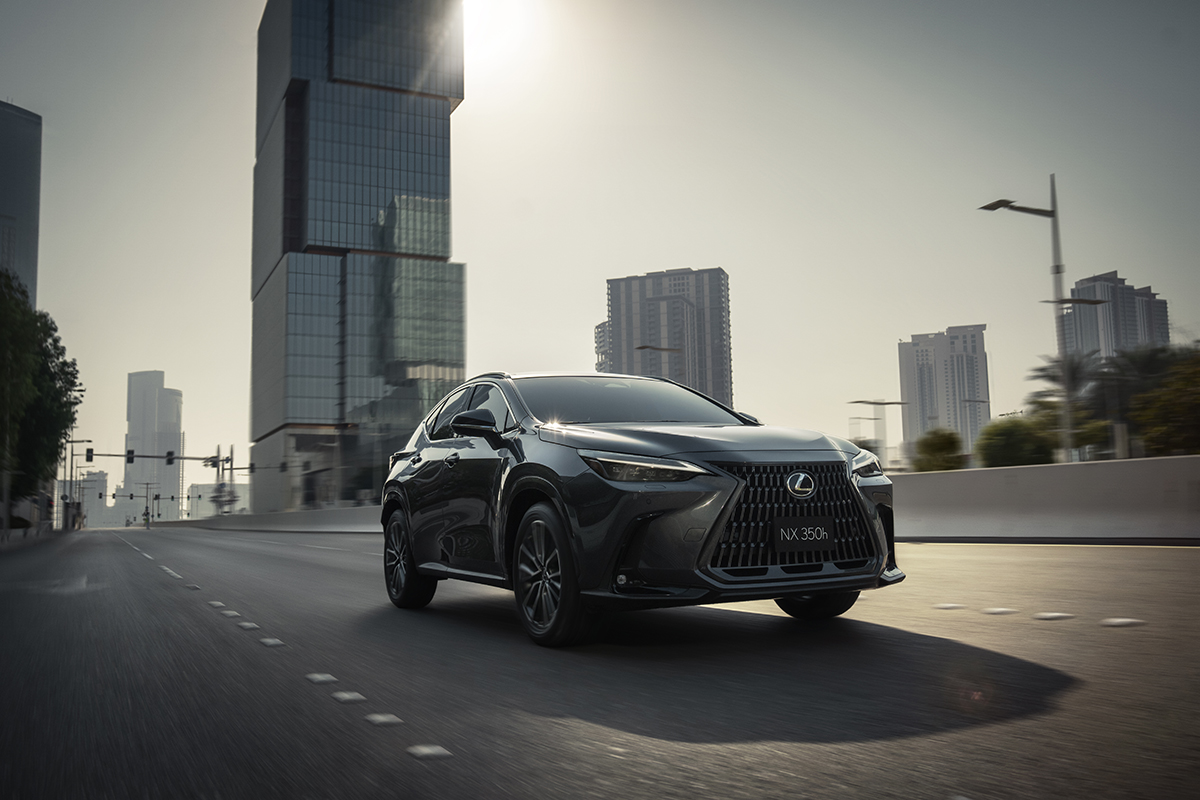 The next chapter for Lexus centers around four pillars, namely Design, Lexus Driving Signature, Electrification[1], and Advanced Technology. The all-new NX plays a key role in leading the brand forward by embodying all of these aspects: 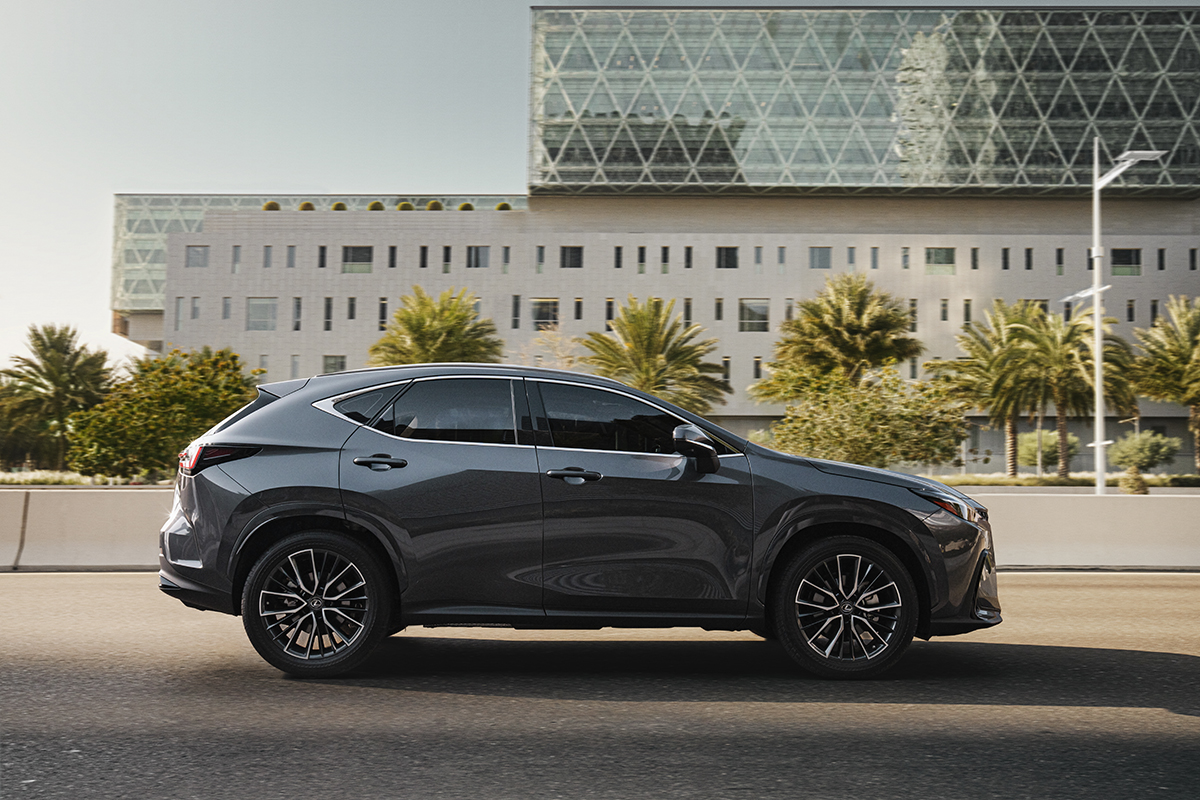 The hallmark Lexus spindle grille at the front of the vehicle plays an integral role in its design, with an upright position that dispenses with its chrome frame. Smooth lines flow back to accentuate the long bonnet, adding form and volume to the body as it flares broadly through to the muscular rear wings. The front design features four projector LED headlights incorporating Lexus’ first slim Adaptive High-beam System (AHS). In contrast, the L-shaped daytime running lights positioned above the headlights have a fade-out function when the driver activates the indicators. The long front-end contrasts with a condensed rear section that is distinguished by new L-shaped all-LED light clusters and Lexus’ signature blade lighting in a bar spanning the vehicle’s width. On the tailgate, the Lexus emblem has been replaced with the ‘LEXUS’ name to create a modern, simple look that further strengthens the vehicle’s visual identity.

The all-new NX is the first model to feature Lexus’ Tazuna concept for the driver’s cockpit, an approach that was initially revealed in the Lexus LF-30 electrified concept car. Taking its name from a Japanese word describing a rider’s use of the reins to control a horse, Tazuna focuses on delivering direct, intuitive control of the vehicle by following the principle of ‘hands on the wheel, eyes on the road.’ It also raises the quality of the driving experience by making the driver feel confident and in command of their vehicle and surroundings. To help keep the driver’s attention focused on the road ahead, the multi-information display (MID), multimedia screen, gauges, and meters are grouped so they can be easily read at a glance. 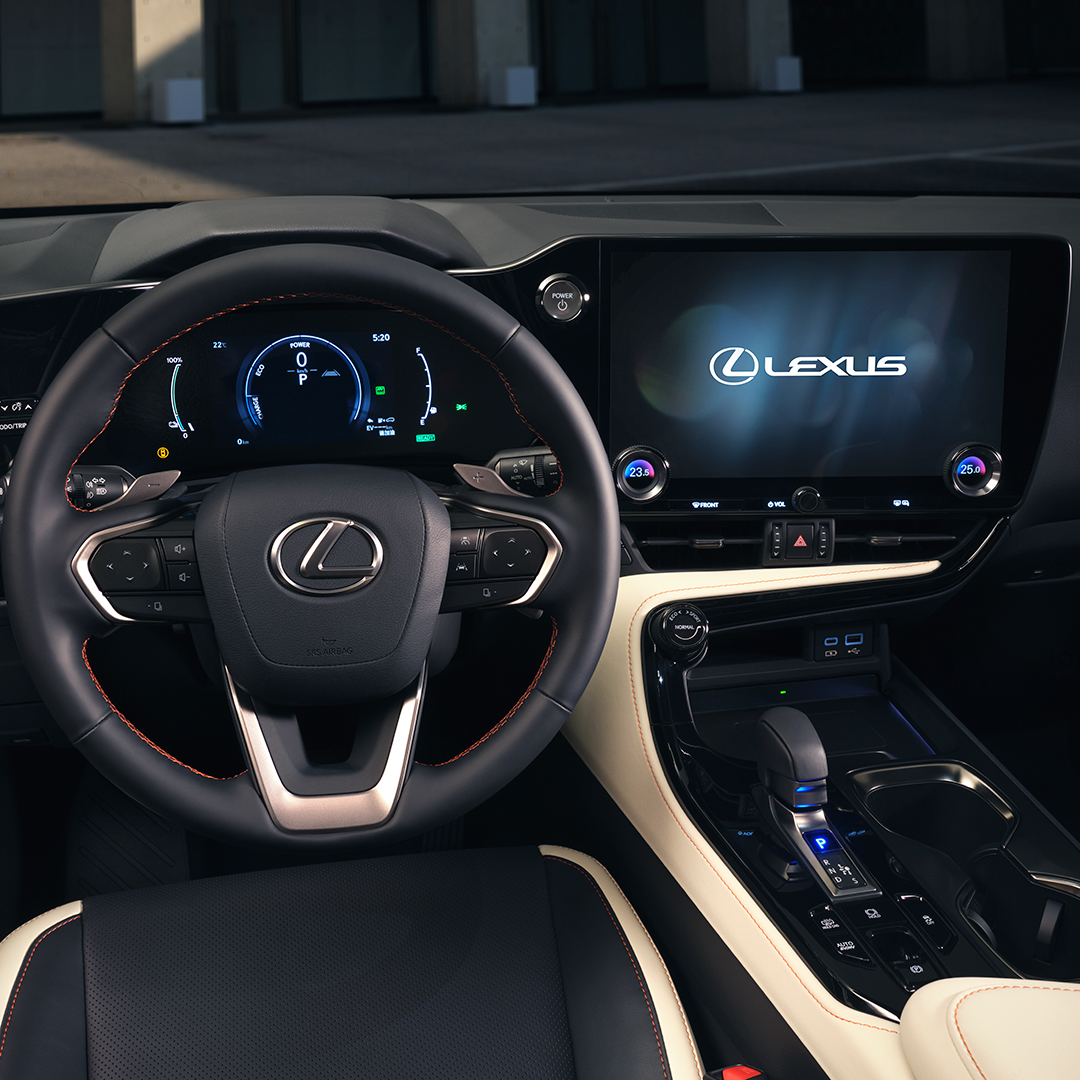 The steering wheel features a modern design that will be adopted on other new-generation Lexus models and has been precision engineered by Takumi craftspeople to provide the best grip feel and enhance the driver’s feeling of control and connection with the car. The shift lever was made as compact as possible, while fitting snugly in the hand at an ideal angle. While the driver experiences the focused, engaging environment created by the new Tazuna cockpit design, passengers enjoy a greater sense of space with elevated levels of comfort, quality, and attention to detail that are quintessentially Lexus, evoking the feeling of a luxurious lounge.

Inside, drivers can create an oasis with nature-inspired Thematic Ambient Illumination, an optional feature that bathes the NX interior in a choice of 14 themes. Each theme has been carefully selected to express a full range of emotions and evoke a feeling of comfort, with themes including Rain Forest, Waterfall, and Sunset. In addition, there are 64 different ambient lighting colors to choose from.

The all-new NX’s inviting interior lets drivers and passengers enjoy a host of advanced features for a refined cabin experience. These include a new 14-inch touchscreen multimedia system – a Lexus first – that is compatible with Apple CarPlay® and Android Auto™, a 7-inch color multi-information display (MID), a wireless charging system for smartphones, and a Climate Concierge to ensure the cabin temperature is precisely adjusted to suit each occupant. The system uses S-Flow control to recognize which seats are occupied and directs heating or cooling performance accordingly, while taking into account the temperature setting, cabin temperature, ambient temperature, and the effect of sunlight through the windows.

The vehicle also offers SmartAccess with a push-button start. It comes complete with an 8-way adjustable power driver seat, as well as ample luggage space, thanks to the 60:40 split-folding rear seats. Additionally, the 2022 Lexus NX adds the convenience of an electrically powered backdoor. 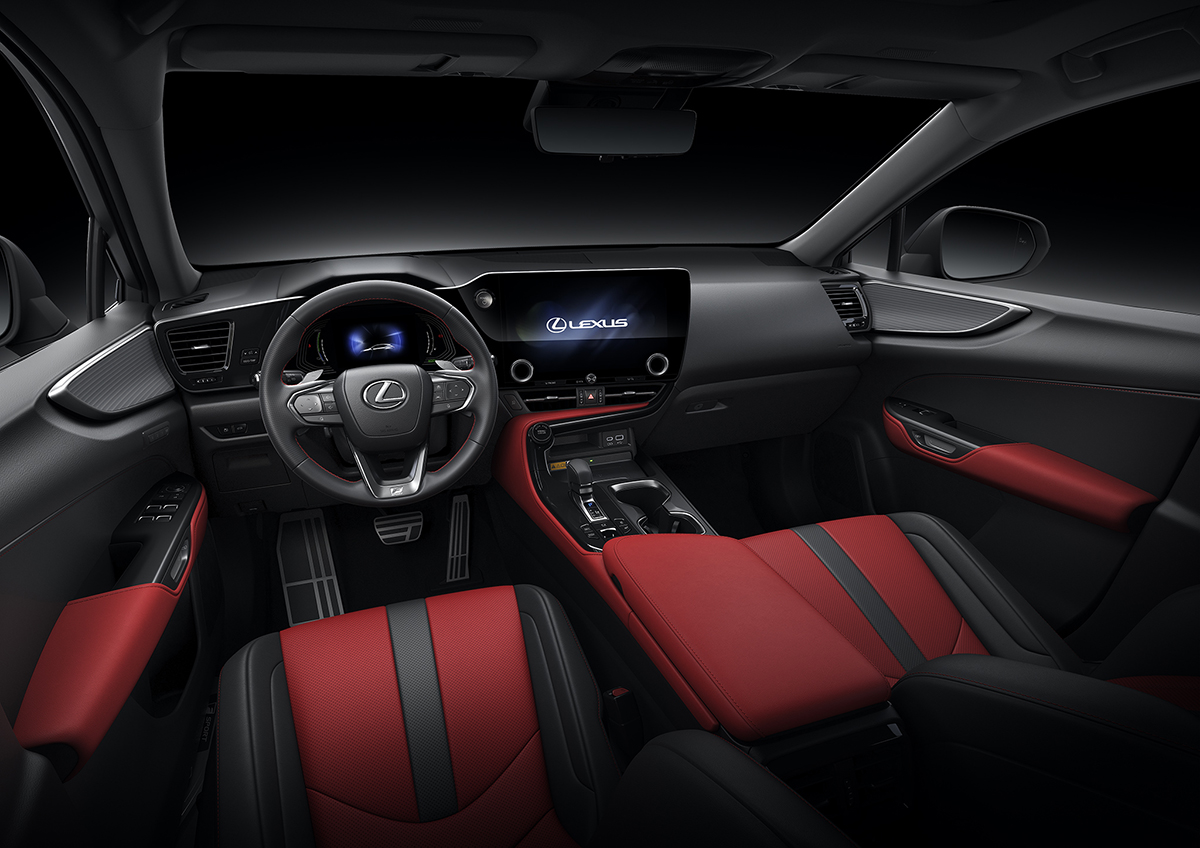 The all-new Lexus NX hybrid-electric model can be driven entirely on electrical ‎power with zero fuel consumption and tailpipe emissions, or by combining the power generated from both the petrol ‎engine and two electric motors, depending on the vehicle’s speed and customer’s driving behavior. ‎Its hybrid-electric batteries are continuously charged by either the petrol ‎engine or when decelerating and braking, eliminating the need to plug in a power cord. A host of advanced technologies ensure the hybrid-electric model drives like any other conventional vehicle and ‎does not require special fuel.

As with any Lexus vehicle, safety is a top priority for the all-new Lexus NX. Drivers can enjoy complete peace of mind, thanks to the Lexus Safety System+, which is an advanced safety and driver assistance system that includes a Pre-Collision System (PCS) with new features and expanded detection range, Automatic Emergency Braking (AEB), Emergency Steering Assist (ESA). 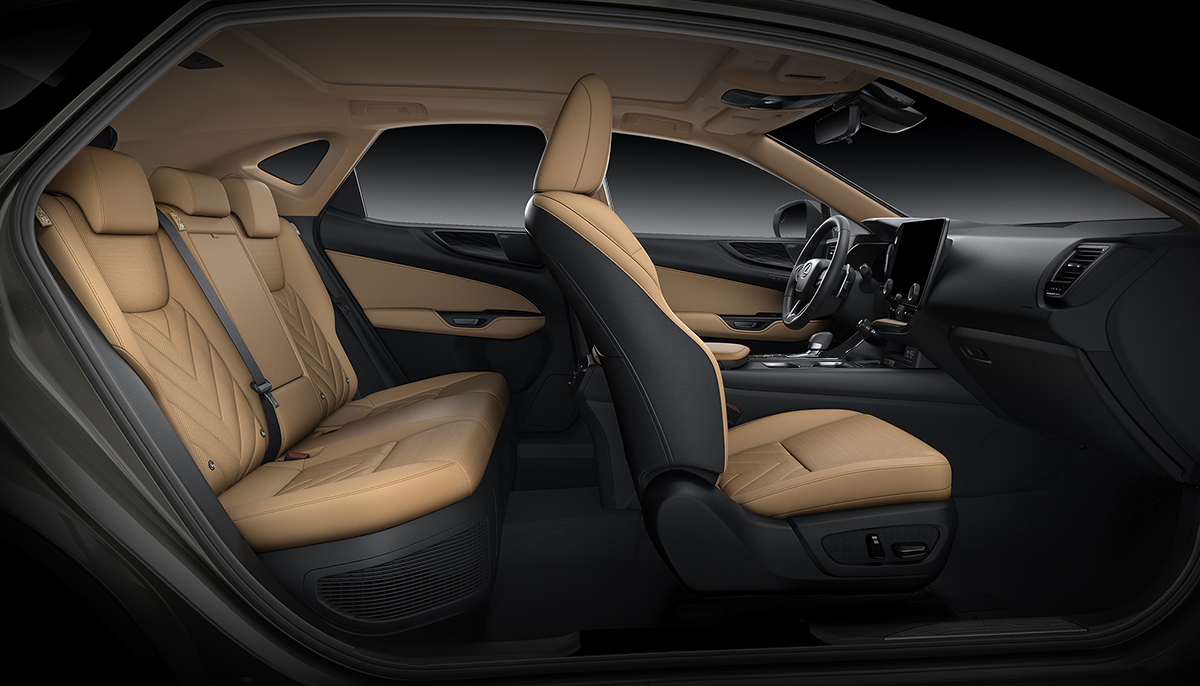 Further adding to its stylish visual appeal, the 2022 Lexus NX comes in a refined range of color options that allow discerning owners to customize their vehicles according to their tastes. Customers can choose from nine distinctive exterior colors, including two new colors, namely Sonic Chrome and Madder Red. Meanwhile, the interior comes in four elegant colors, including brand-new Black & Rich Cream and Hazel options, together with Dark Rose and Black. Three newly developed wheel designs have also been introduced in 20-inch size to further express the driving feel pursued by the Lexus brand.

For those seeking to experience the ultimate in thrilling responsiveness, the all-new NX is also available in an F Sport version. Engineered for exhilaration, the F brand DNA has trickled down from the legendary LFA, which represents the pinnacle of refined performance. The NX F Sport model boasts exclusive interior and exterior features, including a distinctive ‘F’ mesh-pattern grille in Piano Black, new front and rear bumper designs with larger side vents cut into the front bumper, black roof rails, and 20-inch alloy wheels with a 10-spoke design inspired by the wheels used on Lexus’ LC flagship coupe. The cabin comes with Dark Spin Aluminum ornamentation, a unique meter, bolstered sport seats, a newly developed steering wheel, and aluminum pedals and scuff plates. Owners can choose from a range of ten exterior colors that emphasize the vehicle’s sportiness, including two that are exclusive to the NX F Sport model, namely Heat Blue CL and White Nova GF. The interior is available in Flare Red, White, and Black variants.