THE LEGEND IS BACK 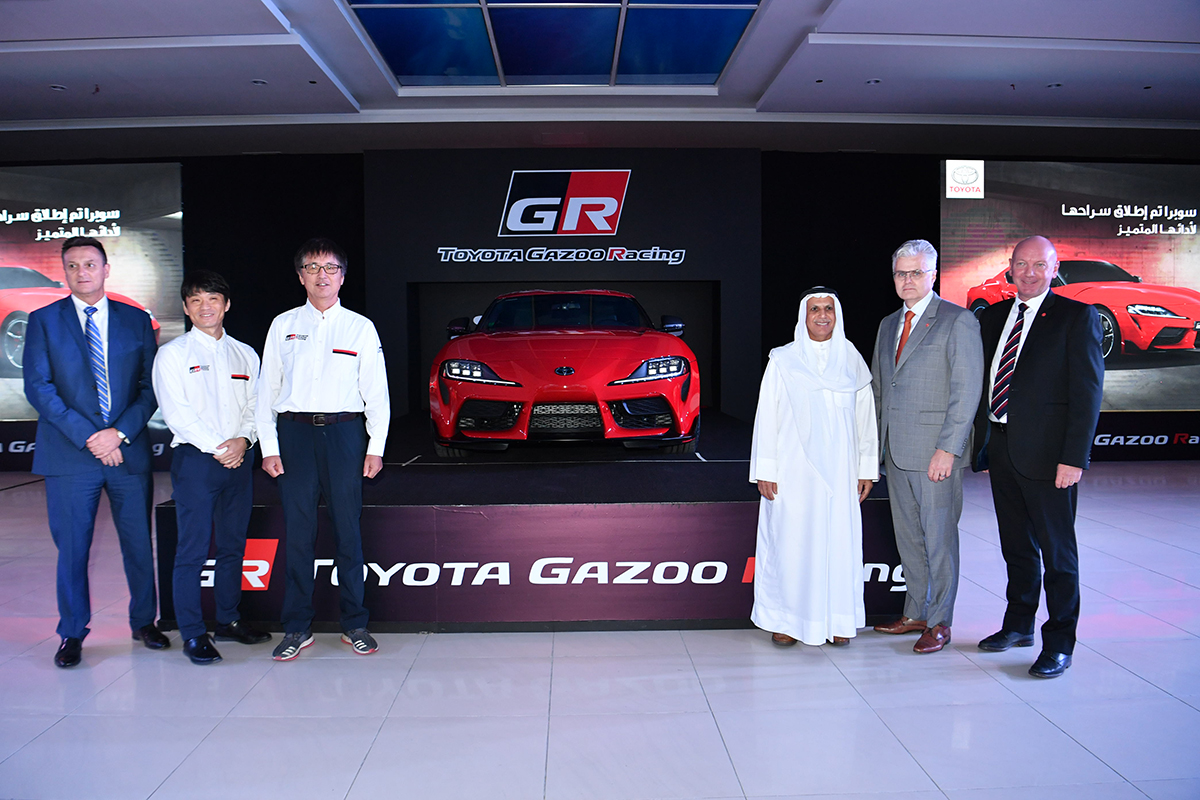 Kuwait, Thursday 3 October 2019: Years of anticipation among the region’s sports car enthusiasts came to an end today with the launch of the fifth-generation Toyota GR Supra in the Middle East. The eagerly-awaited return of the iconic vehicle is set to delight Supra fans and inspire a new generation with its stunning design, high-octane performance, and exciting driving experience. 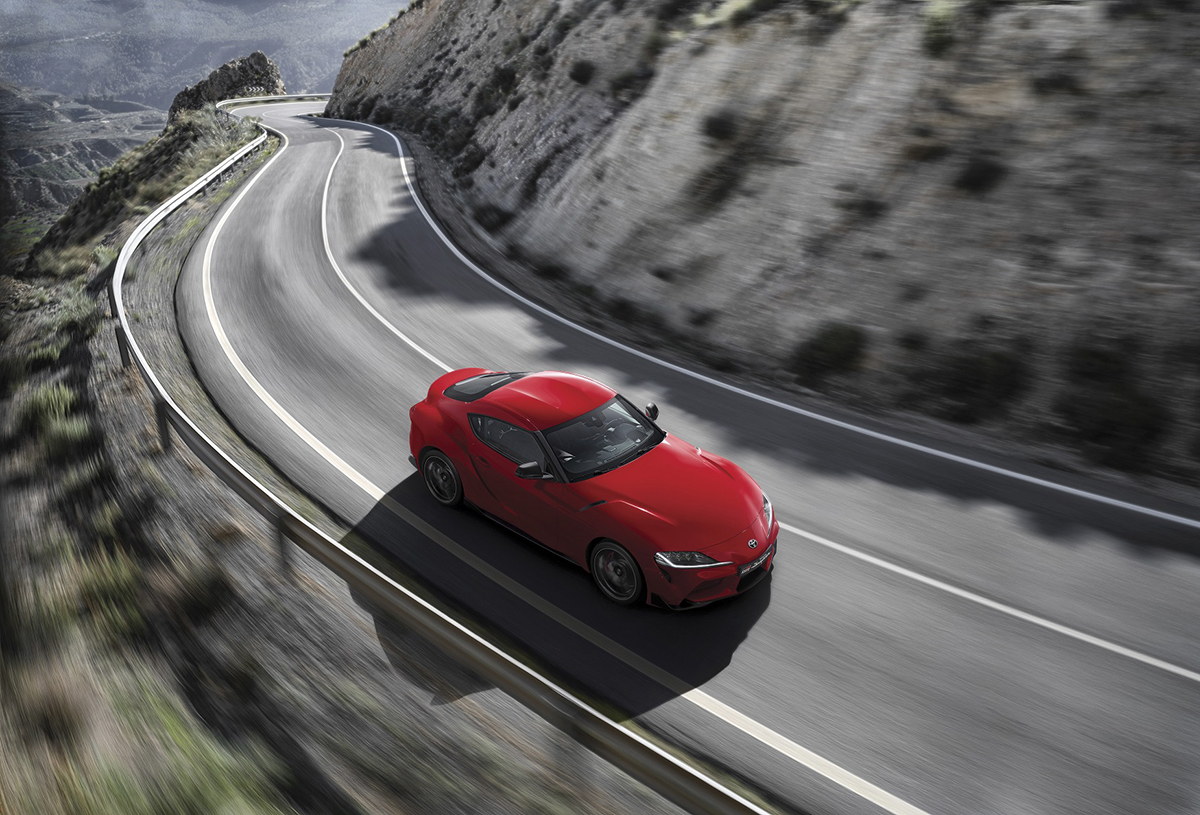 According to Mubarak Naser Al Sayer “An ambitious journey for Toyota, with the passion for sports cars, design and performance has arrived at a new milestone. The legacy of this iconic masterpiece from Toyota goes back 40 years, since it started production in 1978. As we always say time rewards innovation, venture and boldness. The last Supra rolled out of production line in 2002, and after 17 years, the Supra is back.”

The Supra name evokes the power, performance, and handling that defined a succession of world-class cars for a quarter of a century, which built a reputation both as formidable performers on the road and all-conquering machines on the racetrack. The all-new GR Supra is the first Toyota global model developed entirely by GAZOO Racing (GR). The team has been developing its cars and people through its participation in motorsports with the goal of making ‘ever-better’ cars ever since first competing in Germany's 24 Hours of Nürburgring endurance race in 2007. GR’s years of knowledge and expertise have been channeled into bringing the Supra back to life in the form of the all-new Toyota GR Supra, an all-new expression of pure sports car performance that people the world over will find fun to drive. 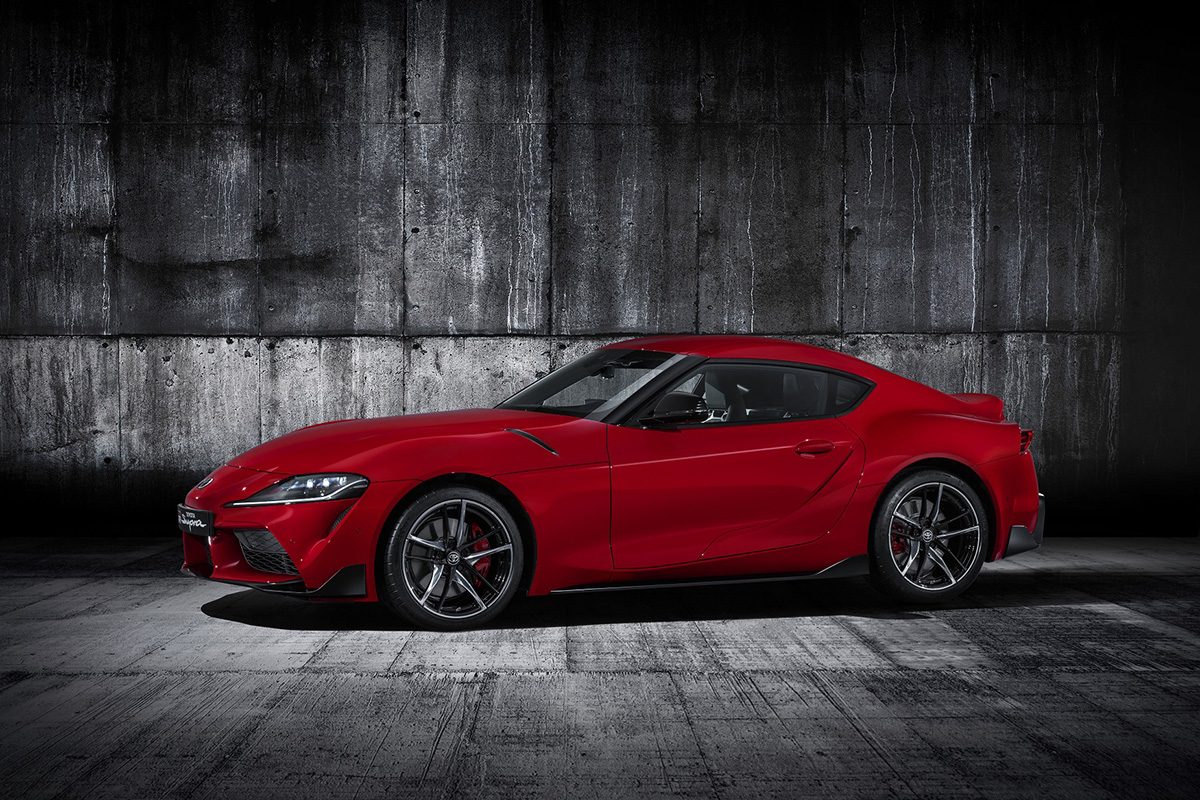 Chief Engineer Tetsuya Tada, who headed the vehicle’s development, said: “The history of Supra development is marked by the pursuit of driving pleasure created by the relationship between driver and car. The all-new GR Supra really reacts the way you want and feels good to drive. I can definitely say that the acceleration delivered by the GR Supra's straight-six turbocharged engine feels truly exhilarating. The solid torque it provides continuously elevates the acceleration feel to a sublime level. Once people have experienced that feeling, even those who don't know or who have forgotten about the fun of driving a car will think, ‘That feels amazing!’”

Tada continued: “It’s not about numbers, it’s the sense of becoming one with the car; that is what we were pursuing and was the main consideration throughout the development process. We aimed to ensure that the car properly hugs the road surface and delivers excellent stability, offering supreme driving confidence regardless of road surface conditions.”

“We know several Toyota customers and sports car enthusiasts have had one question in their minds – Is Supra coming back? Toyota believes in the principle of “customer first” and in that spirit they decided “Yes The legend is back”. When the arrival of the new Supra was announced earlier this year, we could experience waves of excitement across the globe.” commented Scott McNicol. 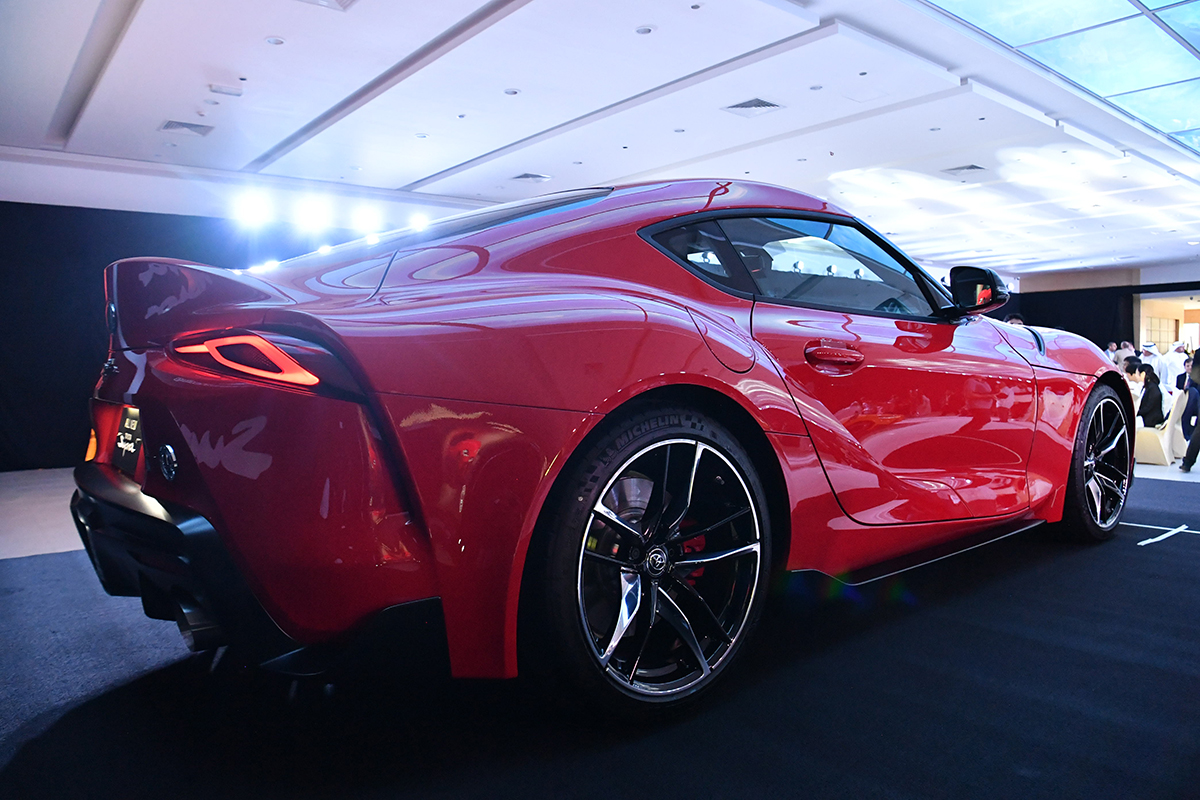 Yugo Miyamoto, Chief Representative, Middle East and Central Asia Representative ‎Office, Toyota Motor Corporation, commented: “We are thrilled to launch the all-new Toyota GR Supra, which builds on more than 50 years of rich heritage to deliver our purest sports car experience yet. The Supra is one of Toyota’s most iconic models, and we wanted to create a vehicle that honors its legendary reputation and carries its sporting legacy into the future. With an exhilarating blend of power, balance, and agility, it offers the ultimate expression of driving pleasure.”

Miyamoto added: “I’d like to thank the incredible team involved in bringing our vision for the all-new GR Supra to life. I also extend my gratitude to our customers for inspiring us on our continuing journey to develop ‘ever-better’ cars.”

The launch of the all-new GR Supra marks the end of a 17-year hiatus since the production of the previous generation concluded in 2002. As with all previous generations, the 2020 GR Supra is a front-engine, rear-wheel-drive vehicle powered by an inline six-cylinder engine. Extensive attention has also been paid to the fundamental elements of wheelbase, tread, and center of gravity, thus achieving superior handling performance befitting a pure sports car.

The 2020 GR Supra’s 3.0-liter turbocharged engine produces up to 335 hp and 500 Nm of torque. The torque comes on strong even from very low engine speeds, thanks to a combination of a twin-scroll turbocharger, direct fuel injection, and continuously variable timing on both the intake and exhaust camshafts. Engine response is further enhanced thanks to the inline six’s variable intake-valve lift system, which adjusts intake valve timing and duration for optimal performance. The 8-speed automatic transmission delivers speedy up and downshifts, and features paddle shifters for manual control when desired. Short ratios for the lower gears and a launch control function, which is not intended for use on public roads or repeated short interval use, enable powerful acceleration with maximum traction.

The 2020 Supra offers two driving modes, Normal and Sport. The Sport Mode sharpens throttle response, increases steering weight and improves transmission shift crispness. This mode also engages a more aggressive active differential tuning and amplifies the exhaust sound. Meanwhile, Traction Mode can be activated as part of the Vehicle Stability Control System to provide track-driving capability by reducing the intervention of the traction and stability control functions. Launch Control is available only when the vehicle is in Sport and Traction modes.

For performance driving enthusiasts, the all-new GR Supra offers an active differential that uses an electric motor and multi-plate clutches to control lateral torque. The active differential precisely controls torque distribution between the rear wheels when cornering under both acceleration and braking, enabling greater momentum through a corner, with stepless variable locking from 0-100 percent. Excellent handling and stability and superior ride comfort are realized through the vehicle’s optimized construction, which incorporates both front double-joint type MacPherson strut suspension and rear multi-link suspension. 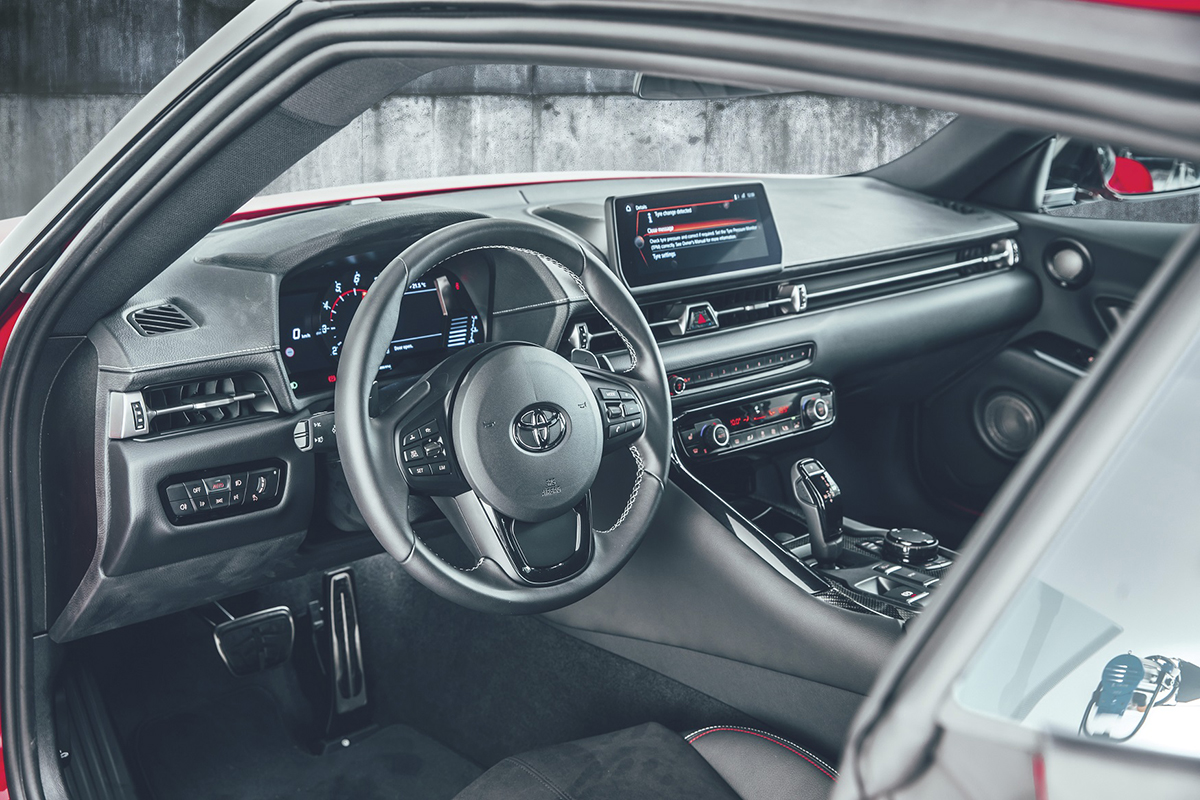 The 2020 GR Supra embodies Toyota’s Condensed Extreme design theme, which was first previewed by Toyota in its dramatic FT-1 concept car at the 2014 International Auto Show in Detroit. Condensed Extreme refers directly to the vehicle’s packaging, and comprises three principal elements; a short wheelbase, with large wheels and a wide stance; a taut, two-seat cabin; and a long bonnet with a compact body, which reflects the drivetrain combination of an in-line six-cylinder engine and rear-wheel drive. These elements combine to create a design that is visually appealing to sports car enthusiasts.

The all-new GR Supra design achieves a 50:50 weight distribution while optimizing front-to-rear aerodynamic balance. The frontal design was inspired by the fourth-generation Supra, but has a more expressive look. The vehicle’s low stance is emphasized by a prominent central grille flanked by large air intakes, which are essential for engine cooling. The distinctive headlight units feature a six-lens LED arrangement incorporating the indicators and Daytime Running Lights (DRL). The rear combination lamps feature a purposeful structure with the turn, tail, and stop functions integrated into the distinctive main ring shape. In side view, the low bonnet generates a dynamic line that flows rearwards from the car’s low nose, while the back edge of the bonnet and rear spoiler are set at almost the same height, linked by a low beltline.

The fifth-generation GR Supra’s distinct personality is completed by its exquisite interior, which balances function with premium comfort and convenience features. Influenced by the layout of single-seater racing cars, the cockpit places the driver at the center of the action by neatly combining traditional Grand Tourer elements with ultra-modern functionality. The low, slim horizontal dashboard maximizes the forward view through the windscreen, while the main controls are tightly grouped for quick and easy operation. The instrument panel, center console, and door trim combine seamlessly to give the cockpit a strong, unified feel.

The 2020 GR Supra’s gauge cluster features an 8.8-inch color Thin Film Transistor (TFT) LCD with an analog tachometer in the center and a digital speedometer on the left side, creating a sporty image that reflects the vehicle’s racing heritage. A 1.8-inch full-color Head-Up Display (HUD) provides various driver-focused information, while a further 8.8-inch widescreen touch display located on the dashboard features a navigation system, which can also be operated via remote control on the center console, enabling easy fingertip access without disturbing driving posture. Additional features include a back monitor with guidelines, dual-zone automatic air conditioning system, and a JBL 12-speaker HiFi Surround Sound system with a seven-channel amplifier.

As with all Toyota vehicles, safety is paramount. High-tensile and ultra-high-tensile strength steel have been used for the main body-part materials, realizing a lightweight yet highly rigid body that effectively absorbs impact energy. A four-point pop-up hood system is available as well to protect pedestrians in the event of a collision.

The all-new Toyota GR Supra is available in a range of eight exciting colors, including the newly developed Matte Storm Gray Metallic, a matte finish with a hint of blue that creates an impressive, finely honed image. Emotional color schemes and materials have been used to express sports car performance and suit the selective preferences of discerning owners. The interior comes with a choice of newly developed Ignition Red or classic Black color schemes, which can be offset with either Carbon Ornament or Dark Silver Paint Ornament detailing for the ornamentation to emphasize functionality and further add to the stylish interior. Contributing to the vehicle’s outstanding handling and stability, high-performance tires are available with 19-inch forged aluminum wheels with black paint and a buffed finish.